Flashback 2013: Why We NEED the Redefining HERstory Movement

Black Coffee No Cream: Why VH1 is Failing in its Attempts to Diversify their Programming

Martin is a nationally known award-winning and multifaceted journalist and the recipient of the 2013 NABJ “Journalist of the Year” award. He is currently the host and managing editor of TV One's daily morning show, NewsOne Now, senior analyst for TheTom Joyner Morning Show, and a syndicated columnist for the Creators Syndicate.

“I am excited to welcome Roland Martin as the newest Truth In Reality Advisory Council member,” said Truth In Reality Founder and Chief Executive Officer, Sil Lai Abrams. “Mr. Martin brings to the organization a wealth of knowledge and expertise of the media and political landscape.”

In his role with Truth in Reality, Martin will work to ensure the health and success of the organization by guiding Truth in Reality’s strategic and programmatic policies, as well as assist in the recruitment of potential partners and strategic alliances.  Through his thought leadership, Martin will help Truth in Reality advocate for members of the Black community to empower themselves to change the depiction of women of color and interpersonal violence on reality television.

For additional information on Truth in Reality, current Board and Advisory Council Members, or to join the cause and download the Media Advocacy Toolkit, please visit TruthInReality.org.

About Truth in Reality

The mission of Truth in Reality is to change the way women of color and interpersonal violence are portrayed in the media, especially on reality television. Our goal is to challenge the negative values these shows promote and change the broadcast standards and practices for the unscripted television genre. Through digital activism, public awareness campaigns and educational programs they aim to change society’s acceptance of interpersonal violence and ultimately reduce its incidence in the Black community.

Trayvon Martin and the Reality of Violence

Redefining HERstory is a campus based educational and social action campaign developed by Truth In Reality, a 501 (c) 3 media advocacy organization. The goal of the program is to challenge students on their existing belief systems around domestic violence and sexual violence and redefine the predominately negative existing media narrative of Black women by using the media messaging on reality television as the basis for this conversation.

Redefining HERstory empowers students with media literacy tools that will enable them to think critically about their media consumption habits; educate them about domestic violence, bullying and sexual violence; expose them to women of color from all walks of life whose achievements have redefined our COLLECTIVE history; and provide them with an opportunity to create and promote their individual real-life counter narratives to the prevailing negative depiction of women of color on reality television.

For more information on how your college or university can join the Redefining HERstory Movement, please click here.

You DON'T have to be a college student to join the Redefining HERstory Movement!  Here are the 3 C’s of how you can take action:

2. Co-sign the Truth in Reality pledge & forward to your friends

3. Communicate the message of the Redefining HERstory Movement by joining us on our weekly #RealityTVCheck tweet chats by following us on Twitter at @TruthInReality_ using the hashtag #RedefiningHERstory. These weekly interactive discussions on Twitter engage the larger community in conversations around how we can counter the effects of the media messages on violent reality television shows and take place every Monday night from 8:00 pm to 9:00 pm ET/7:00 pm to 8:00 pm CT.

Join the Truth in Reality team and our followers as we engage in an online dialogue around the violent images and messaging on many of the reality shows featuring casts comprised mainly of women of color.  This kind of digital conversation exposes participants to information that can help reshape their individual and collective views on women of color and violence, messaging that motivates them towards social action while exposing them to a variety of voices in women’s empowerment. 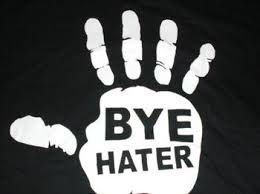